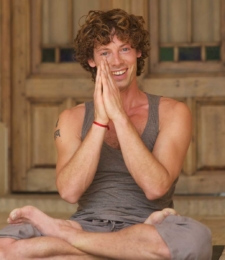 Isaac began practicing Yoga in 1997, initially only to complement his career as a dancer with companies including the English National ballet, Birmingham Royal Ballet and Spanish National Ballet. In 2001 his desire to pursue yoga overtook his desire to dance, prompting him to train as a teacher.

He has travelled extensively in India, studying many styles including Ashtanga, Sivananda, Iyengar, yoga therapy, and Traditional Hatha. Isaac has been lucky enough to learn from many great teachers including Richard Freeman, David Svenson, Liz Lark, Padma Nair, Vinay Kumar, Wim Hof, Yogacharya Venkatesha, Acharye Hema, and many more. He would also like to acknowledge the immense influence in his life of spiritual teacher Mata Amritanandamayi, the plant medicines, and all the teachings received from friends and family.

Isaac has also studied both Western and Indian and Asian philosophy and religion, graduating from SOAS University with a first class honours. Other qualifications and skills include the Wim Hof method, plant-based nutrition, Thai yoga massage and Chavutti Thirumal.

Isaac is qualified with the British wheel of Yoga and is certified by the Yoga Alliance.

View our other destinations with other yoga teachers

destination yoga is owned and operated by The Healthy Holiday Company Ltd.  All the flights and flight-inclusive holidays on this website are financially protected by the ATOL scheme. When you pay you will be supplied with an ATOL Certificate. Please ask for it and check to ensure that everything booked (flights, hotels and other services) is listed on it.

All non flight bookings are insured with Affirma financial protection insurance. Therefore you can be sure that there is no financial risk to your payment for your destination yoga holiday in accordance with our consumer protection obligations.